Benedict Of Peterborough. The Chronicle, under the title Gesta Regis Henrici II. et Ricardi I., is ascribed to Benedict, who was Abbot of Peterborough from 1177 until his death in 1193BC. 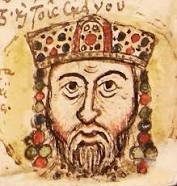 BENEDICT OF PETERBOROUGH. The Chronicle, under the title Gesta Regis Henrici II. et Ricardi I., is ascribed to Benedict, who was Abbot of Peterborough from 1177 until his death in 1193BC.

On the same day (May 6) the king of Navarre's daughter and the Queen of Sicily, who was sister to the king of England, entered the port of Limezun, attended by the king's fleet. The Emperor, having rallied round him his men, who were scattered amid the thickets in the mountain valleys, pitched his camp the same night on the banks of a river about five miles distant from the town of Limezun, declaring with an oath that he would fight the king of England on the morrow. The report whereof was brought by scouts to the king, who long before daylight armed himself and his men for battle, and advancing silently came upon the Emperor's men, whom he found asleep. Then, with a loud and terrifying shout, he charged into their tents, and they, suddenly awakened from sleep, were as dead men, knowing not what to do, nor whither to fly. The Emperor himself escaped with a few men, naked, and leaving behind him his treasure, his horses, his armour, his magnificent tents, and his imperial standard wrought all over with gold, which the king of England at once dedicated to the blessed Edmund, King and Martyr of glorious memory.

On the morrow the Emperor of Cyprus, seeing that all his people were deserting him, sent ambassadors to the king of England, to sue for mercy, and offered to make peace on these conditions, namely, that he should give the king of England 20,000 marks of gold, by way of compensation for the money taken from the bodies of those who had perished in the shipwreck, and surrender the persons and goods of the survivors; also, that he should himself accompany the king to Syria, and remain there in the service of God, together with a hundred men-at-arms, and four hundred Turcople horsemen, as long as the king stayed there; also, that he should deliver his only daughter and heiress into the king's hand to be married by him to whomsoever he would, and with her his Empire; furthermore, that he should surrender the castles of his realm to the king, as a pledge for the steadfast observance of the treaty.