Did You Know? The Pedieos River 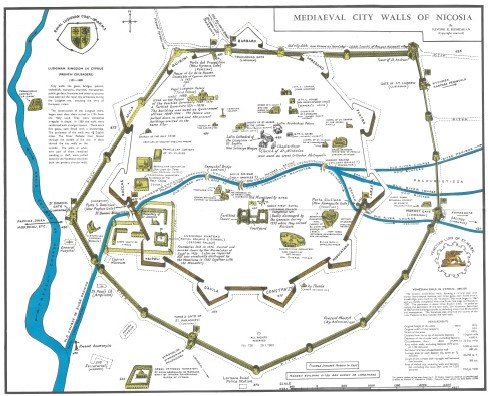 The Pedieos is the longest river in Cyprus, flowing from the Troodos mountains close to Macheras monastery across the Mesaoria plains through to Nicosia. It then steers east, meeting the sea at Famagusta Bay close to the ruins of Salamis. The river has a total length of 98 km and a maximum of 10 meters. An 18 km stretch of the river banks, in and around Nicosia, has been turned into pedestrian walkways.

From antiquity all through the medieval period the river flowed in Nicosia dividing the city more or less into two parts and often floods occurred since the fourteenth century destroying buildings and orchards. Many wooden or stone bridges were built, over the river, facilitating movement among neighbourhoods.
When the Venetians realised that an Ottoman attack was eminent, apart from shortening the circumference of the walls of Nicosia, they also felt that the river was a liability. So, they diverted the route of the river outside the town and directed it straight towards Famagusta Bay.

The river bed eventually dried up and was used by the Nicosians as a dumping ground. All garbage, all animal carcasses, all rubble ended up in the river bed creating a dangerous source of epidemics, stench and filth. This went on through the Ottoman years. When the British arrived, they realised that something had to be done and tried to clean up the river bed. But in vain. The people of Nicosia continued using it as their dumping place. In 1883, the first elected mayor of the city, Christodoulos Severis, felt he had to put an end to this disaster. He had an ingenious plan. He announced to the people of Nicosia that whoever would bring earth and fill in part of the river banks he would treat that as a building plot and give it to them. It worked, and while in the centre of the river bed the mayor built a sewage channel, left and right plots were being formed and buildings were being raised. Thus, a new street was formed.

This street was called Ermou street and became the most commercial street of the town, where all communities together worked, traded, met and exchanged their goods. Ermou street was closed down with barbed wire during the first intercommunal troubles in 1957 but re-opened in 1960. By 1963, more troubles saw the permanent closure of Ermou which became the dividing line in Nicosia, known as the Green line because the British military officer who demarcated the positions of each side on the map used a green pen.