Did You Know? The pomegranate (Punica granatum) 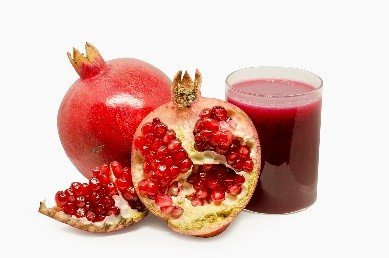 The pomegranate was originally found throughout the Mediterranean region and in the sixteenth century was taken to America. Best time for pomegranates is October to February] and in the Southern Hemisphere from March to May. The name comes from the Latin pōmum "apple" and grānātum "seeded". It was also known in England as the Apple of Grenada from the French pomme-grenade. It was one of the first fruit trees to be domesticated in the eastern Mediterranean region. Carbonized parts of the fruit have been identified in early Bronze Age excavations in Jericho and late Bronze Age in Hala Sultan Tekke in Cyprus. But Kandahar in Afghanistan is famous for the best pomegranates.

Since ancient times the pomegranate has been regarded as a symbol of prosperity and ambition.

Goddess Hera in her temple held a sceptre in one hand and offered a pomegranate, like a "royal orb", in the other. "About the pomegranate I must say nothing," whispered the traveller Pavsanias in the second century, "for its story is somewhat of a holy mystery." The pomegranate has a calyx shaped like a crown. In Jewish tradition, it has been seen as the original "design" for the proper crown.

Even today, the fruit is very symbolic for the Greeks. When one buys a new home, a pomegranate is placed near the home iconostasis. Every first day of a new year a pomegranate is thrown to break at the entrance of the house for prosperity and fertility, and good luck. When Greeks commemorate their dead, they make kollyva, consisting of boiled wheat, mixed with sugar and decorated with pomegranate. In ancient Israel, pomegranates were known as the fruits that the scouts brought to Moses to demonstrate the fertility of the "promised land". In Armenia, representing fertility, abundance, and marriage, It is also a semireligious icon. For example, the fruit played an integral role in a wedding custom widely practiced in ancient Armenia; a bride was given a pomegranate fruit, which she threw against a wall, breaking it into pieces. Scattered pomegranate seeds ensured the bride future children. Annually in October, a cultural festival is held in Azerbaijan featuring fruit cuisine mainly the pomegranates from Goychay, which is famous for its pomegranate growing industry.

The ’Did You Know’ series is made possible with the support of OPAP Cyprus.