Did You Know? The Canopy of Heaven 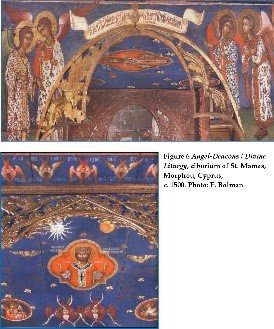 The ciborium of the Holy Altar of the church of St Mamas in Morphou, is one of the oldest on the island, probably very early sixteenth century.

It is of a simple form in type, of carved wood and painted decoration. On the western side, the ciborium preserves three arches with gilt acanthus leaves, deriving from Gothic architecture. It was documented and conserved in 2007 by SAVE with a distinguished team of Italian conservators. An inscription which refers to the painting of the ciborium on the north outer side reads: “The present ciborium was painted by the subvention and at the expense of the most holy of priest monks Mr Pavlos, abbot of this monastery and by the hand of myself Silvestros Axiotis of whom you who read be mindful in the Lord.” The painter Silvestros Axiotis worked on many other icons.

The ceiling of the ciborium is painted dark blue with gold stars in relief and the sun and the moon are personified within. In the centre there is Christ with two arms raised. A number of angels, mostly in pairs, seem to be talking about Christ and are beautifully painted in colourful designs. A similar ciborium, of perhaps the same period exists in the church of Archangel Michael, Trypiotis, in Nicosia.