Did You Know? The Buyuk Khan 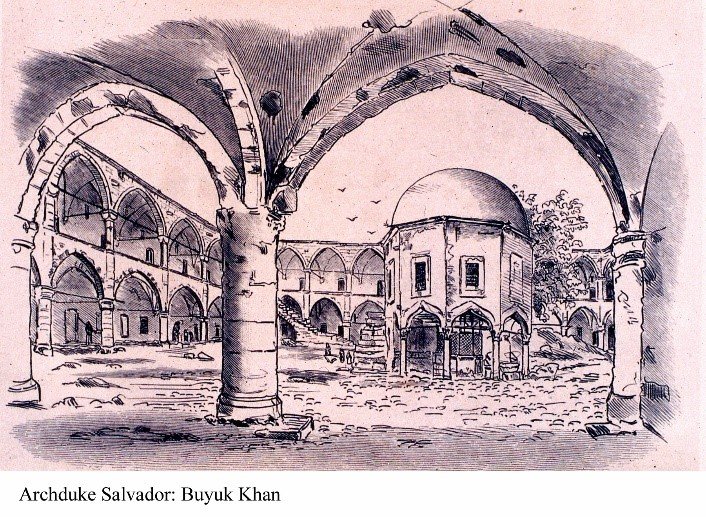 The Buyuk Khan, or Great Inn. One of the first constructions erected by the Ottomans in 1572, this inn was one of the most luxurious inns in the Near East. Look up to see the chimneys, one for each room. Now this was luxury! The entrance leads you into a beautiful courtyard surrounded by arches on two stories. In the centre of the courtyard is a medrese, a quiet retreat where Moslems could sit and read the Quran. Next to it, under the tree, is the tomb belonging to the man who built the medrese and the fountain bene it. Buyuk Khan is today an artisan centre and full of life. This shaded courtyard is a popular spot for a meal or a coffee. Woman can be seen preparing the daily traditional Turkish bourek and piruhi. Every Saturday, at around 11.00, this is the meeting site for a group of Greek and Turkish Cypriots who hold an open discussion about the Cyprus problem and whatever else is worth discussing under the sun. Anybody can join in! They are known by their opponents as the Traitors’ Club for working against nationalism and towards reconciliation. The khan is a good place for coffee. Whether you call it Greek coffee, Byzantine coffee, Turkish coffee, Cyprus coffee, it will still taste the same on either side of the divide and it still brings people together.

The capitals of the arches, vary in design, while the old wooden door leading towards the centre, or east has a smaller one within it. The khan would open at sunrise and close its doors at sunset. Whoever was late entering would come in from the “eye of the needle”, the smaller door. And there was no way for their camels to come in! Animals would have to stay outside. A saying goes that it is as difficult for the camel to go through the eye of the needle as it is for a wealthy man to enter Paradise!