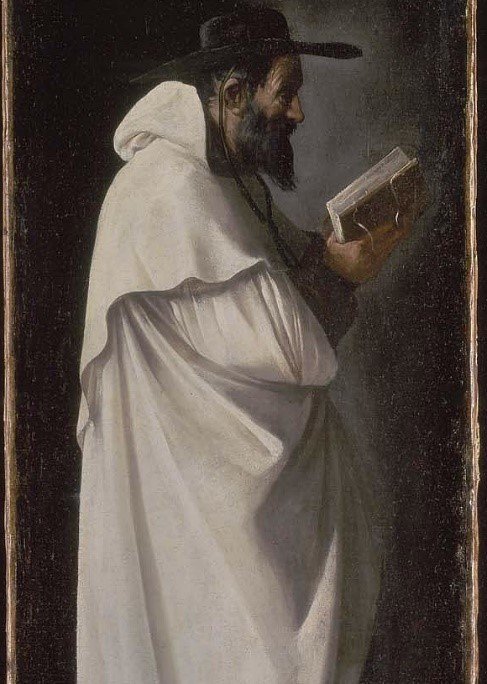 He came from a very poor family and on his own saw himself through school. He entered the Carmelite Order at the age of twenty-one and took his religious vows at Bergerac where he taught for two years. He studied philosophy at Agen, where he was ordained a priest three years later. He then followed three years of study in Paris.

He was preaching in Cahors, during a procession held in hopes of an end to a serious drought, when rain began to fall. This was viewed by many as miraculous. In 1354 he was made bishop of Patti and Lipari. In 1359 he was appointed the Apostolic Papal Legate in Cyprus and in 1363 he was also appointed Archbishop of Crete. In 1364 he became the Latin Patriarch of Constantinople.

He chose to live in the Carmelite house in Famagusta, and was one of the closest advisers and an inseparable companion to King Peter I. Peter Thomas made the Carmelites the most influential Order in Cyprus and inspired the crusade that captured Alexandria.

In 1367 Peter Thomas organised a procession to the “St Cemetery”, just outside the city of Nicosia, where King Henry I and John I were buried. There was a pulpit in the cemetery and he preached from it.

Most of the city’s population was there to listen to him. But there were also reactions to his ideas. In about 1360 the Greeks of Nicosia attempted to burn and break down the gates of St Sophia Cathedral in a demonstration against Peter Thomas because he was proposing to give Latin confirmation to the Greek bishops. The Latin lords arrived in time to save his life. He had hidden by the main altar where he faced his assailants with the cross in his hands. The same year, 1360, the Papal Legate officiated the coronation of Peter I as King of Jerusalem at the Famagusta Cathedral but only a year later the plague ravished the city.

Peter Thomas organised a procession of the entire population. Latins, Greeks, Armenians, Nestorians, Jacobites, Indians, Ethiopians, Saracens and Jews marched together barefoot to the centre of the city to listened to the sermon with which he concluded the prayers at St Nicolas Cathedral. It was said t at the end about 200 sick people were found to have been cured and the city was freed from the epidemic.

During the celebrations of Christmas 1365, an elderly man by then, Peter Thomas insisted on performing his nocturnal and diurnal offices in the Cathedral which meant coming and going in the mud and rain from the centre of the city to his Carmelite church. A bad cold caused his death the first days of 1366. Another version about his death is that he took part in the military operation against Alexandria, Egypt, in 1365 during which he was severely wounded. He died from his injuries at Cyprus a few months later.

At his request Peter Thomas was first buried under a marble slab at the entrance to the choir of the Carmelite church and after a few months, during which he performed miracles, his body was moved into the choir under a more impressive monument inscribed with an epitaph by a German monk: Virgo, virum rege virgineum, qui virginis alme conspicuum titulum gerit, huic sibi da loca palme.

Peter Thomas was proclaimed a saint the day he died and his relics were venerated. One of the miracles performed was when the Superior of the St Francis monastery in Paphos, suffering from terminal illness, visited the Carmelite church in Famagusta, placed his hand on the tomb of St Peter Thomas and then on himself and was instantly cured.