Did You Know? Claude Sosthène Grasset 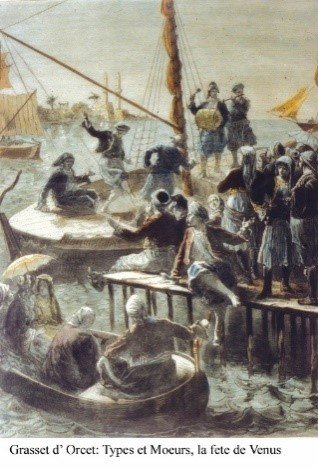 During the second half of the nineteenth century, magazines such as L’Illustration, Le Monde Illustré, Le Revue des deux Mondes and Tour du Monde, used sketches by travelling artists as well as by residents of the island who regularly sent articles and illustrations to France to supplement their income. Their purpose was to make the island known to the French public, to offer viewers exotic images and to keep alive within the French political milieu, through archaeology and other sciences, the idea of re-possessing Cyprus.

An ardent supporter of this idea was a young Frenchman who lived in Cyprus married to a local girl of French descent. His name was Claude Sosthène Grasset (1828-1901).

Grasset studied law in Paris and was introduced to the arts at the studio of the sculptor Elias Robert. In 1860 during a tour of Europe and the Near East, he decided to make his home in Cyprus where he married Aimée Laffon, daughter of a French doctor in Nicosia. Grasset was very interested in the antiquities of the island and saw himself as an intellectual whose duty was to procure the maximum number of art treasures for his country. He often wrote letters to personalities in France, amongst whom were Mme Cornu, the sister of Napoleon III, the French consuls in the Levant and officials of the French Ministry of Foreign Affairs, urging them to take advantage of the abundance of archaeological wealth to be discovered and acquired. It was in response to his persistence that the Phoenician mission organised by Ernest Renan, under the auspices of the French Government, included Cyprus in its explorations. It was Sosthène Grasset who accompanied twice the famous antiquarian/ orientalist Guillaume Rey in Cyprus when he collected a number of antiquities that he deposited in the Louvre. Grasset felt he was the authority on Cyprus and this prompted him to write a series of articles accompanied by detailed illustrations describing different aspects of life in Cyprus, such as scenes from the feast of Cataclysmos, (the feast of Venus), Les Vendanges dans L’Ile de Chypre - aspect d’une Phenecha (établissement viticole Chypriote), (and of archaeological excavations.

In these works, a particular element is present: a persistent effort to beautify the island and the people by attributing to them qualities that would conform to French taste. Thus, women are presented wearing Western jewelry; the headdresses of men are reminiscent of the Napoleonic era; and scenes are infused with idealised and almost arcadian overtones which give a somewhat sanitised, pastoral flavour to their subjects, in order to appeal to the French audience. Grasset described the feast of Cataklysmos:

In the evening the decorated boats awaited the pilgrims who descended from all the mountains in the island; the caiques were filled with Greek women draped in long white muslin, which made them resemble ghosts. Each caique had on its bow two Moslem musicians, one of whom played the flute and the other a big drum. I do not know why this privilege was reserved for the Moslem and why they always use these two instruments. Nevertheless,it is probable that the flute represents Venus vernal and the drum Cypris of Venus autumnal. The women do not dance at all during this fest; but the Moslem and Christian men compete in leaping, in the caiques and at the cafes. It is in fact rare for a few drops of blood not to appear at these waterside scenes and as the Moslems are less used to drinking than the Christians, it is they who bloodstain the feast.