Did You Know? Catalan Window 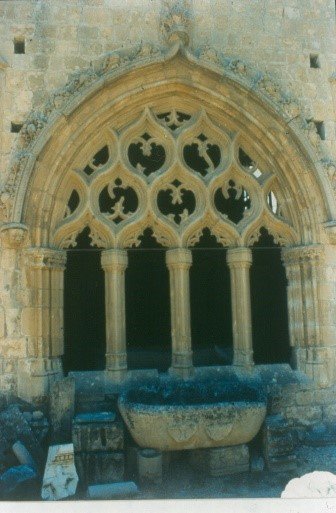 Above the entrance of what purported to be the third Lusignan Palace, in the centre of Nicosia, stood a wonderful architectural gem, a window made by Catalan stonemasons. Stylistically it resembles the Palace of Justice and the Town Hall at Barcelona. This window has a pointed arch and the jambs are carved with three slender colonnettes ending in foliate capitals. The moulded arch is framed by a hood-mould resting on brackets carved with human heads. Round the outside are thick-set bunches of crockets and a fleuron as finial. The whole entrance of this building dates back to the fourteenth century. Can one see this window today? The whole building was demolished by the British administration in the early 20th century as it would have been very costly to restore it. In its place the Courts of Justice were built along with other administration buildings. But the beautiful Catalan window was salvaged by George Jeffery, the then director of Antiquities, and was transported to his house, built with the wall of his courtyard. Today, the Catalan window can be seen there, the building being used as the Lapidary Museum of north Nicosia, just behind St Sophia Cathedral.