Did You Know? Archangel Michael-Trypiotis church 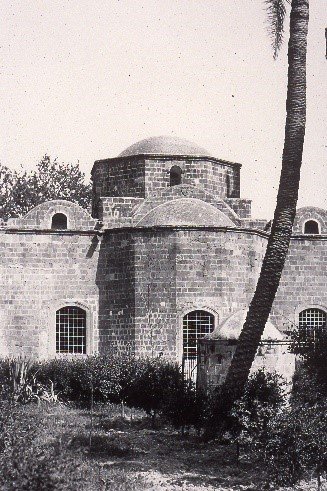 Archaeologists say that the church was built on the site of a monastery (1295), which used to be the residence of the archbishop of Cyprus until the 17th century. The main church had one nave and was dedicated to the Feast of the Transfiguration. In the sixteenth century it was known as the monastery of Andreion or the Virgin Mary of Andreion. It was of great significance and quite wealthy. The Abbot of Andreion was called upon to consecrate the Greek bishops. Achimandrite Kyprianos claimed that either Andreion or Sergi Flatro was the predecessor of the church of Archangel Michael Trypiotis. In 1690 it was reconstructed and turned into a three-aisle church with an adjacent gallery. An inscription beside the south porch dates the church to 1695 and built at the expense of the priest Iacovos and Christian parishioners. Remains of the previous version are still evident and include: a relief located near the southern entrance that features two lions with human heads, lintels, small gables and the renaissance-period coat of arms in the northern part of the church. Trypiotis comes from the word trypa meaning hole. The Archangel is purported to have made a hole with his spear in Asia Minor and diverted the water of two rivers that would have flooded his church. The story goes that he did exactly the same in Nicosia during one of the major floods of the Pedieos river.

The church is an excellent example of Franco-Byzantine architecture, with three naves and a dome that almost has the aspect of a square, built with attractive, smoothed calcarenite stone. The entrance to the church is decorated left and right with the face of the mermaid Melusine. Within the church, there is an icon of Archangel Michael Trypiotis dated 1635 and on the wall hangs a rare portrait of an old woman by the famous Greek artist Kounellakis, donated to the church many years ago. The ciborium is thought to be one of the three oldest on the island, dating back to 1503 and in very good condition. The iconostasis is the widest to be found in Nicosia and the work of Savvas Taliadoros, completed in 1812. Finally, a plaque high up the first column in the church commemorates the death of the children of a British family. The neighbourhood takes its name Trypiotis from the church and was known also as Bash Mahalla, that is, the great neighbourhood.