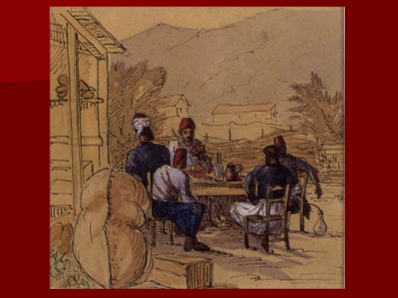 Some of the natives were the very blackest people I ever met, so intensely black that I know of nothing to which to compare the colour of their skin. They were always dressed in the gaudiest and brightest hues… The Turk is found to be truthful, sober, abstemious, honest, brave, simple and devout in his forms and practices of worship, having a child-like faith in his superiors. I have never seen a dirty Turk. He is hospitable and offers the best his house contains. The Greeks have an unspoken dislike to us. They are invariably antagonistic; they look upon us with jealousy and fear; they are dull and lazy, have no ambition, nor the patriotic longings of the Greeks. They are frugal and careful in their habits, sober and fond of hoarding their money, they do not care about making it but like saving it. As for the women, the Cypriot women, after their twentieth year, become so fat as to be almost shapeless. Over the Turkish women I marvelled greatly, in their absurd French boots and long white sheet, which, shrouding them from head to foot, left visible only the single eye that peered so curiously at me as I passed. They looked like great white bundles, though hardly more ungraceful than the Greek women. The latter dress in European skirts of the fashion of twenty years ago, with much fullness round already abundant hips. Already the shapeless figures of the Greek women with their unbecoming way of arranging their hair with a hideous gauze handkerchief tied lightly around their heads, strikingly contrast with the picturesque-looking men. The peasant women wear yellow or crimson shoes, short white socks, loose white trousers fastened at the ankle, a skirt of bright cotton and a richly embroidered bodice cut in a low square on the bosom, which is covered with a transparent piece of worked muslin…Innumerable glass bangles on the arms complete the costume. Bunches of jasmine and sweet – scented geranium-leaves are fastened on one side and on the other a half-wreath of worsted and silk flowers on wire.