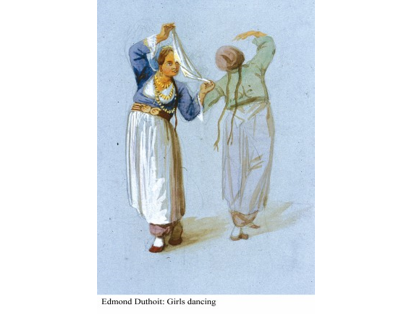 “So the ball started with a quadrille named la romeğa, which is simply a kind of chain where the boys and the girls holding themselves by the hands, make a lot of gestures following with precision the fast and gay rhythm of the music. The ball lasted only a quarter of an hour after which they unrolled a big carpet in the middle of the hall. They cleared the hall to increase the space and most of the men went out in the street and stood at the door to watch the spectacle. The dance was called Angrismeni, which means Contemptuous; it was enacted by two people, a young woman, the most attractive and shapely of the group, entered and stepped on the carpet dancing; the rhythm of the organs was an “Andantino pathetic”. After having done a tour, a young man came in dancing with agile movements and holding a handkerchief in his hand; he tried to approach the girl, while she, with contemptuous gestures, appeared to despise him and avoid him. The boy worried, challenges destiny, approaches his sweet subject, wants to make peace with her but she repels and insults him.

It seemed to me like Alfeo was admiring breathless Aretusa, who being cruel, avoids him and he runs and complains about his fate. All the steps and movements of the two dancers were following the rhythm perfectly and expressed lively and truly the feelings of contempt and of the contrary. Finally, the young man seeing himself scornfully rejected, trembles and does not know what to do. She stares at him in a threatening way, he, despairs, sighs, looks at the sky with contempt, fastens his handkerchief around his neck, tightens it and departs from himself. The beautiful girl runs to him and takes him in her arms thinking he is dead and burst into tears. She unties his handkerchief, calls him and faints. He awakes by her cries of pain and finding himself in the arms of his Diva, the lost love appeals to the heart. Happiness fills both of them, they hold hands and the dance becomes joyful and festive. Then the organs changed their pathetic rhythm into another more lively and joyful one. And the ball ended in a folkloric way and precision. I found that the imagination of pantomime is always appreciated by the Greeks, and they perform this easily and one can assume that the taste for Art conserves itself in the spirit of the nation.”