Antonio Mondaini, alias Namindiu, was in Cyprus in the second half of the eighteenth century and travelled around the island taking notes for a book he was intending to publish. Amongst other cities he visited Kyrenia. 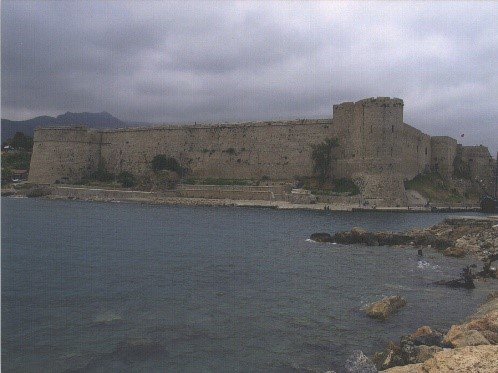 Antonio Mondaini, alias Namindiu, was in Cyprus in the second half of the eighteenth century and travelled around the island taking notes for a book he was intending to publish. Amongst other cities he visited Kyrenia.

“I saw in the vicinity of Cerines a lot of caves which served as sepulchers, dug into the stone by the bows of a chisel. We penetrated into them through a narrow entrance and inside were about four to six partitions for the dead… Advancing towards Cerines, I crossed its plains spread with carob trees, extraordinary big in shape. Their huge production is exported yearly to Alexandria.

I finally arrived at Cerines; during the Lusignan times this town had an Episcopal seat, now under the Turks, it has been reduced to a small town, where the bishop of Cerines stays and where his Cathedral exists. The Turks have a mosque and the administrative government is represented by a Digdaban or commissioner and a Cadi, or judge; it was a respectable city already mentioned by Ptolemy and Diodorus as Ceraunia, or Ceronia and the former acknowledges it among the northern cities of the island. Pliny and Dionysios, named it Cinyra, from Cinyro- ancient king of Cyprus- to whom the founding of the town is attributed. Lusignan states in all honesty that it was called Cirines from Cirus, king of Persia and attributes the foundations to him based only on the link which exists between the word Cirus and Cerines or Cinyra. After having consulted all historians we still do not know who really founded this city… Once in Cerines, I went to see the Digdaban, and after him the Cadi; I offered to each one two bottles of syrup and two boxes of sweets and they were very pleased. They offered me coffee accompanied by a pipe. I had many conversations with the Digdaban and he was very polite. As I was leaving I received the usual perfume. I then went to the Cadi and I received the same honours; he was a very jovial person and I found much pleasure in speaking with him… The small town of Cerines was in a great state of decline, its population reduced to a small number of Greeks and Turks; the Cadi proposed to me a visit to the castle. I followed him and I saw it from a short distance. According to the Cadi it was built on a rock facing the sea by the Portuguese;

-Being Franc, you are not allowed to enter it, but if you want, he continued, to take possession of the castle and its garrison, we can do it very easily without gun or swords but with our pipes, since it is only defended by an old man who eats opium and sleeps three quarters of the day. You see in what position we are abandoned after all. If a ship equipped with 20 men comes, they can take the fortress and the city without encountering any resistance.

So, it was up to me if I wanted to visit it, but my hunger gave me the excuse to refuse. However, the Cadi, after having accompanied me around its walls, left me with the usual polite and friendly compliments. The castle looked like a long square and was considered by many impregnable, but today, considering the military art of war, it would be one of the less resistant. At a few steps, there is a small harbour, where three or four ships can take shelter. There are two French tartane that carry passengers and goods from Cyprus to Caramania. All the governors who come from Constantinople to Cyprus use it. The harbours where these Tartane stop are those of Salefi or Celindria. The big ships are compelled to anchor in the roadstead of Cerines, but in winter the Tramountane blows strongly and all the ships suffer a lot of damages.”