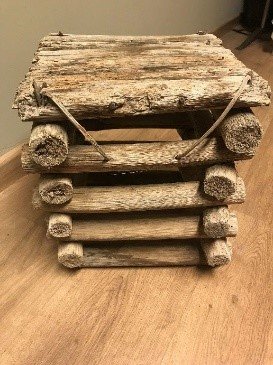 "Sir do you want to see the cartomenos (the promised one) of the Papas’ daughter? Come into the next room and you will find them courting.

Curious to examine their manners I begged the Papas to take me there. We approached the room but we did not want to disturb the youngsters, so we stood near the door as two unseen observers. You must know that Greek villagers make stools about five inches high, of wild fennel which grows in the fields. Nine young girls were seated on such stools and formed a circle. The papadia, a little apart, was busy reading the Life of the Saints and she was particularly absorbed in it; in the centre of the circle was the future groom who, playing the lyre, was following the tune of the songs that were being sung and opposite him sat the future bride. Such songs consisted of short poetic verses and in accordance with the subject matter. The Greeks, especially the women, know by heart a great number of such verses, all concerning love or distain, which they were according to circumstances. The future couple was singing, taking turns. The lyre was accompanied by two cymbals, round like ours but without bells or brass; they were softly played in a low tone by two young girls. All the others were clapping their hands following with precision the meter of the canto."