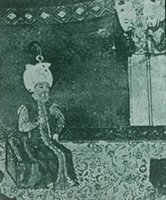 The Venetian historiographer and diplomat Paolo Paruta described the last days of the siege of Cyprus by the Ottomans:

Mustafa Pasha put the Bey of Rhodes in charge of the city [Famagusta], and on the twenty fourth of September left Cyprus, returning victorious and triumphant to Constantinople, where he was received with high honours and universal joy. Yet the victory had cost the Turks dear, for they had lost, so report said, more than fifty thousand men, and among them many commanders of high rank, and their best warriors.