The Venetian Fra Frencesco Suriano landed at Cape Gavata, otherwise known as Cape of the Cats, near Limassol 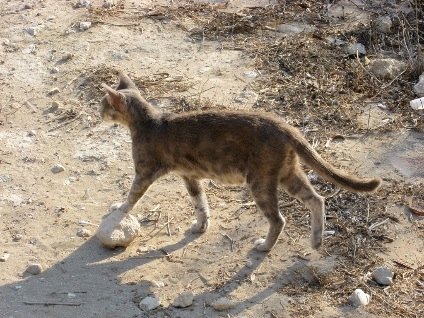 The Venetian Fra Frencesco Suriano landed at Cape Gavata, otherwise known as Cape of the Cats, near Limassol:

I heard a marvellous thing. From the said city of Lymisso up to this cape the soil produces so many snakes that men cannot till it, or walk without hurt thereon. And were it not for the remedy which God has set there, in a short time these would multiply so fast that the island would be depopulated. At this place there is a Greek monastery which rears an infinite number of cats, which wage unceasing war with these snakes: one has lost a nose, the other an ear the skin of one is torn,  another is lame: one is blind of one eye, another of both. And it is a strange thing that at the hour of their food at the sound of a bell all those that are scattered in the fields collect in the said monastery. And when they have eaten enough, at the sound of the bell they all leave together and go to fight the snakes.