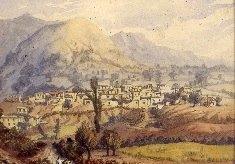 Yesterday morning a countryman brought a couple of infant children into town, in a pair of saddle bags on an ass to give them away! His wife died and he is left with a family of several and not knowing what else to do with them, brought them here to give to whomsoever he could find ready to take them. He succeeded to giving one to Procopi, Mr Ladd’s servant but the other is so small that he will very likely be obliged to take her home. He has two others, one of whom he has promised to bring here to give to Mr and Mrs Ladd if they wish it.

*The poor villager was from Pera Village in the Limassol district.