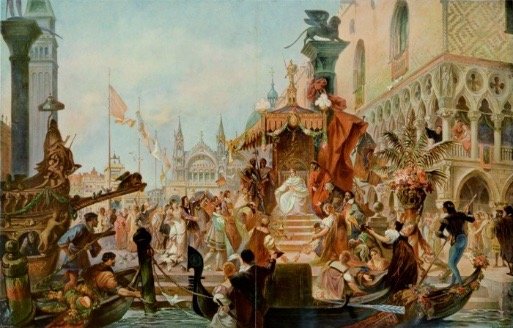 The voyage from Cyprus had taken almost three months. Nothing can have been more delightful than the first sight of the Lido, which her galley reached on 5 June 1489. At once, before she disembarked, homage was paid to her by the leading patricians and their wives. Caterina was taken to the monastery of S. Nicolo di lido. There the Benedictines had prepared the best rooms for her and her ladies. She could at last sleep on land... At an early hour the Doge, Agostino Barbarigo and the Dieci went to S. Nicolo. Already there were many boats about and it was, so far, a glorious day. Caterina was ceremoniously escorted aboard the Bucentaur, the great gilded Venetian state barge. There she was seated beside the Doge, on the poop, on a gilded throne, raised higher than his…Yet the day was not without its alarms, for at one point a storm swept across the Bacino. The suddenness of such squalls is a feature of Venice, yet this one seemed to have been particularly severe and Sanudo, the faithful diarist, tells us that the ladies were greatly frightened. At once the anchor was lowered.