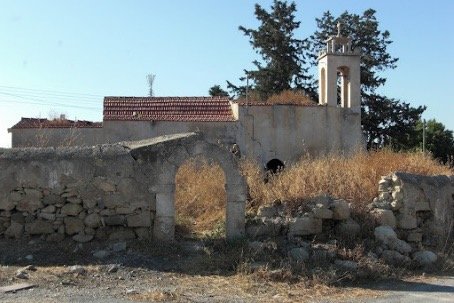 Rupert Gunnis continued his tours around the island and especially Karpasia where he was sure there were many antiquities:

Alexis, Sarg. Kyriako and I to Gastria where we inspected various sites in the “Vallia” to see if much tomb digging was going on. Found several recent attempts at the locality called Castra, then walked along the seashore to Ayios Joannis where I looked at the ruins of the little church and found fragments of glass mosaics (Byzantine). Back to the village inspecting a strange subterranean passage cut in the living rock, perhaps connected with the water supply of the Lusignan castle.

Then to Ayios Theodoros where I had lunch in the Police Station and had a long talk to Yianni (night orderly) and family.

Back to K.K. and found George had discovered a tomb, 6th century small and containing little except a fine amphora, the shoulder decorated with a pattern of lotus-leaves with intertwined stems.