John Lock made a trip to Jerusalem and, having joined a group of pilgrims, they sighted Cyprus 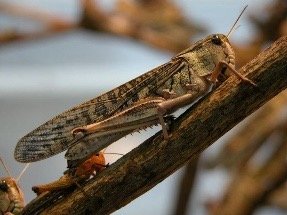 John Lock made a trip to Jerusalem and, having joined a group of pilgrims, they sighted Cyprus:

The 11 in the morning, we had sight of the Iland of Cyprus, and towards no one we were thwart the cape called Ponta Malota, and about foure of the clocke at night we doubled Cavo de le gate, and ankered afore Limisso, but the wind blew so hard, that we could not come neere the towne, neither durst any man go on land. The towne is from Cavo de le gate twelve miles distant. The 12 of August in the morning wee went on land to Limisso: this town is ruinated and nothing in it worth writing, save onely in the mids of the towne there hath bene a fortresse, which is now decayed, and the walls part overthrowen, which a Turkish Rover with certaine gallies did destroy about 10 or 12 yeeres past. This day walking to see the towne, we chanced to see in the market place, a great quantitie of a certain virmin called in the Italian tongue Cavalette. It is as I can learne, both in shape and bigness like a grassehopper, for I judge but little difference. Of these many yeeres they have had such quantitie that they destroy all their corn.