Frederic Hasselquist, a Swedish doctor of medicine was in Cyprus waiting for a ship connection for Europe, and visited Larnaca: 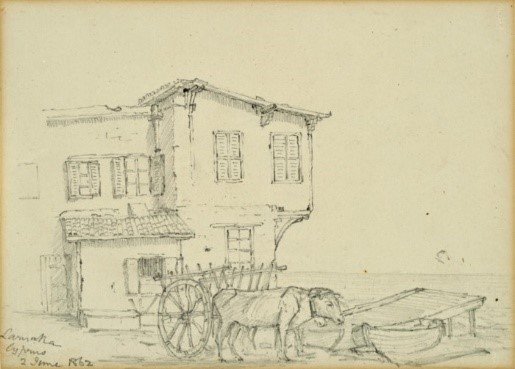 On the 28th we anchored in the roadstead of Larnaco, a village where the European Consuls live. Part of it is on the shore, another and larger part is a quarter of a league from the sea. The Consul of Naples lives in the first, the Consuls of France, England, Venice and Ragusa in the second. I lodged with the Venetian Consul, who is also Consul for Sweden, waiting an opportunity to return to my country. It was this that led me to Cyprus, for I had no intention of travelling in the island, the heat being at this time so great that one can only go outdoors at night. It was not the season for botanising, nor does the island produce any curious plant. I was content with making two little excursions, and began with a visit to the Holy Cross, which is the highest mountain in the island.