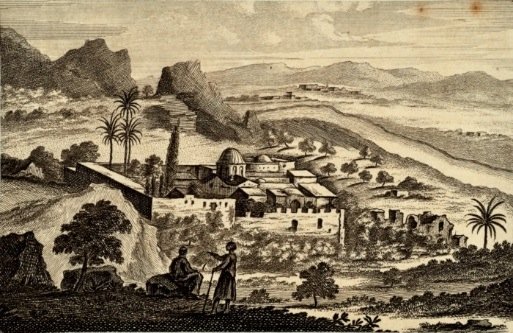 Cornelis Van Bruyn was exploring the area around Kythrea village and the nearby monastery:

Soon after leaving Cytheria we came to a fountain called Cefalofriso (spring-head). It lies under a hill and disperses itself in several directions. The water falls first into an oval basin and with such swiftness that it eddies round and round. At noon we reached the convent of S. Chrysostom, and saw on a mountain near it the remains of a very large building. I started with three others to examine it. But we were not yet half way when the Greek whom I had taken from Larnica was too tired to go on-the hill was very steep-but the other two, one was from the village were we had slept , the other from the convent, remained with me. But we were obliged to rest and take breath a dozen times. The ascent is as difficult and as dangerous as I have ever made….we took an hour and a half to reach the top. There one sees only the live rock, a number of ruined chambers, and large stone built reservoirs. It must have been a huge building with many rooms built at different levels. The sea is visible on all sides except one, and most of the island. The view of Nicosia, with many villages scattered over the plain is very striking.