A description of the church of Saint Lazarus by Pietro della Valle, a Roman of patrician birth 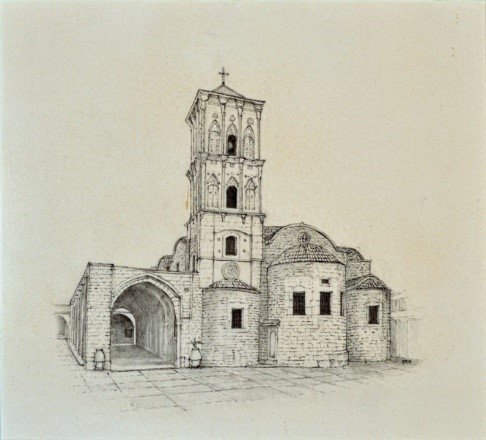 A description of the church of Saint Lazarus by Pietro della Valle, a Roman of patrician birth:

I returned early to our vessel, and stopped on the way to see a Greek church in the Marina, called S. Lazarus. It belonged originally to the Armenians, and in a buttress of its outer walls all the stones are inscribed with Armenian letters. Why it is held now by the Greeks is possibly because there are no Armenians here, as there must have been formerly. It is very ancient, entirely of stone, its arrangement fantastic though common among the Greeks, for there are three aisles with a roof supported on four piers only, and three domes in a row over the middle aisle, and three apses without. Within, the space between the piers is used by men, the aisles on either side by women only. Behind the altar they show underground a tomb like a small grotto, which can be entered through a square opening like the mouth of a vault. This, they say, is the grave of Lazarus who was restored to life by Christ: adding that he built the church, of which he was bishop; that he died here, and that his body was carried later to Constantinople and thence to Marseille, the truth of this being proved by the miracles which are daily worked at the tomb, the sick are healed, and the like. But this is contrary to history, as we have it in the Breviary, Martyrology, &c.