A captain of the East India Company, John Macdonald Kinneir, arrived in Cyprus on January 1814. By the 19th of the same month he was on his way to Kyrenia 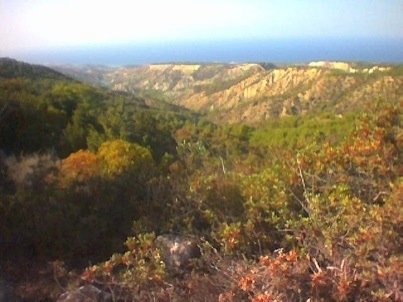 A captain of the East India Company, John Macdonald Kinneir, arrived in Cyprus on January 1814. By the 19th of the same month he was on his way to Kyrenia:

Where I intended to embark for the opposite coast of Caramania. I directed my course through the plain in a N.W. direction and about a mile and a half beyond the city wall, crossed the northern branch of the Pedio, a small stream flowing to the E. At the fourth mile we entered a range of low brown hills, through which we travelled until the ninth mile, when we descended into a narrow flat, running along the foot of the lofty chain of mountains before mentioned; This flat had the appearance of great fertility, but it was neither inhabited nor cultivated. At the eleventh mile we reached the foot of the range; when changing the direction of our course to the N.E. we entered a cleft or opening in the mountains, the sides of which were clothed with Myrtle, a variety of evergreens, and sweet-scented flowers. Our route, for about three miles, led through this defile; when on turning the point of a rock, we had a view of the distant coast of Cilicia and the finest part of Cyprus I have yet seen: a narrow belt of land, covered with shrubs and trees, confined on one side by the sea, and on the other by the mountains, extended to the E and W. as far as the eye could reach. The little town of Cerina or, as the Turks call it, Gerinia, with its ancient chateau, was discerned immediately under us, reflected in the water.