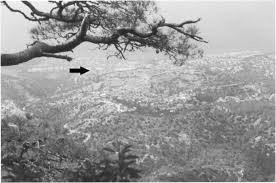 “Hired a car, the road being too bad for mine and to Davlos. A very pretty if dangerous drive. First to inspect the ruins of a small Roman temple on a head-land near the village, not much to see. Then to the village and collecting trooper Avgousti walked for three miles due west to see a large tomb mentioned by Hogarth in his book. Back for a very late lunch and opened a small Iron Age tomb in the afternoon.”