Basil Stewart, My Experiences of the Island of Cyprus, Illustrated from photographs by the author, Skeffington & Son, 1906 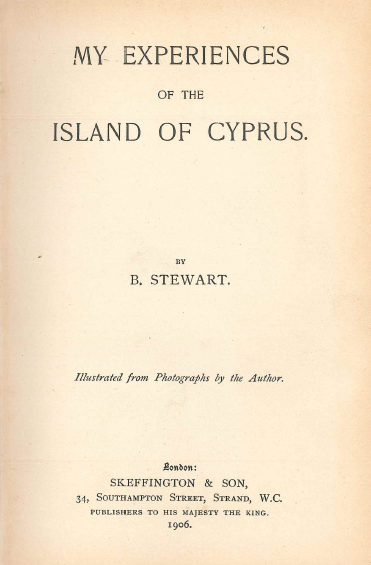 Basil Stewart, “My Experiences of the Island of Cyprus”, Illustrated from photographs by the author, Skeffington & Son, 1906.

“One of the sights of Larnaka is an extraordinary mirage, which daily appears […] The mirage, which only disappears when it is actually raining at Cape Pyla, takes the form of a very real-looking island about a mile off the shore with trees on it.”

British Engineer, Basil Stewart first visited Cyprus in 1904 to assume the duties of a topographical engineer for the construction of the Famagusta-Nicosia railway line. He is considered one of the most influential visitors to have ever been on the island during the early 20th century mostly because unlike the other British, he tried to approach the Cypriots, to learn and understand them, to get to know their customs and habits. Basil Stewart authored a number of books, including: "The Land of the Maple Leaf", “Railway Surveying” and “My Experiences of the Island of Cyprus”, which he presumably wrote during his various visits in Cyprus. The material from this book was collected on two separate occasions, with an interval of nearly two years between, first, when engaged on railway work in the island […] “The other occasion was when, being again in the Eastern Mediterranean, I visited the island a second time, and was able to devote all the time at my disposal to seeing its chief places of interest.” This book can be thought of as a time machine that transport us through a very interesting door to the past, where his descriptions of the cities and the countryside are still a remarkable testimony today. In general, his book on Cyprus is a presumption of a very interesting moment in Cyprus, a moment of great, profound and decisive change in all areas. An island that was timidly entering the stage of development. With his casual and colourful writing style, he depicts his era, mainly concentrating on the temperament and character traits of the island’s inhabitants, thus making this book a delight to read for anyone who wishes to learn more about Cyprus. “I had opportunities of seeing something of the life of the natives which will probably not fall to the lot of the ordinary tourist.”

“I have undertaken this narrative at the request of numerous friends who are interested in Cyprus, and in the belief that it will interesting to the general public, especially that portion who would like to know of a country which is not yet over-run with tourists […]”