Fyler, Arthur Evelyn, 1833, The development of Cyprus, and rambles in the island, With colourded Illustrations, Maps and Plan, London, Percy Lund, Humphries & Co. 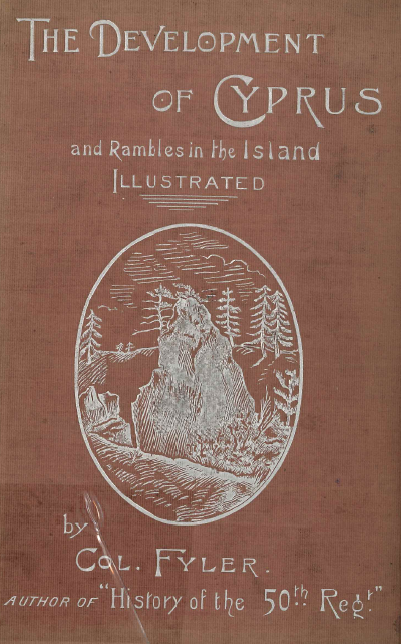 Colonel Arthur Evelyn Fyler joined the 50th Queens Own West Kent Regiment in 1853 and he was immediately sent to fight to the Crimean War (1853-1856). He took part in lots of battles such as the battle of Alma and Inkerman and the siege and fall of Sevastopol and the New Zealand Wars. In the Egyptian war of 1882, Colonel Arthur Evelyn Fyler commanded the first battalion of his regimen. In the following years he obtained various titles such as Captain, Major, Lieutenant-colonel and in 1833 the year he retired, he got the title of colonel. After his retirement he wrote two books: “The History of the 50th or (the Queen's Own) Regiment: From the Earliest Date to the Year 1881. London: Chapman & Hall, 1895”, and “The Development of Cyprus, and Rambles in the Island, with coloured Illustrations, Maps, and Plans. London: Percy Lund, 1899”.

In the The Development of Cyprus, and rambles in the island, “The author hopes that the publication of this work on Cyprus will draw attention to a land that has taken no small share in the history of the world, and has witnessed the marriage of a King and a Queen of England, who were also crowned King and Queen of Cyprus.” Fyler, perfectly describes the cohabitation of the two major communities in Cyprus “Its population may roughly be said to consist of three fourths Greeks and one fourth Moslems, as both parties are more Cypriots than either Greeks or Turks, the distinction between the two being chiefly one of religion and language.” He vigorously avoids making any political comments, believing that later Cyprus will prosper under the British occupancy and that all communities will recognize this and accept being a part of the British Empire. “Nothing has hindered the progress of the Island more in the past, or is more likely to hinder it in the future, than the agitations that occasionally take place for its abandonment.’’

While on a personal tour that he took from Troodos to Kyrenia and Famagusta, he visited many towns and villages where the natural beauty of the island captivated his interest and wrote “The ride from Kyrenia to Morphou through the picturesque villages of Karavas, Lapithos, Vasilia and Myrtou […] is a very pretty one, part of it winds along the coast at the base of a picturesque range of hills, its sunny caves and rocky dells, bright with many flowers […].”

The numerous illustrations in this book, especially in the last chapters, “Which treat of the scenery of the Island, in order to bring the scenes portrayed more vividly before the reader than mere writing could do.” were done from watercolour sketches, made by the author during his explorations around the island.

Overall, an interesting read for any avid reader who wishes to spend some time learning more about the history of this troubled island. “May it be the future fate of this Island to have only a history of continued progress and prosperity”