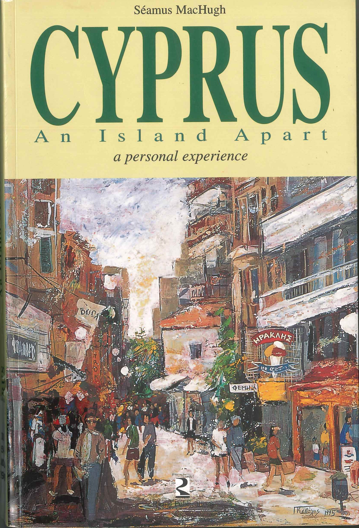 Cyprus, island of the sun, shining for 340 days a year,

To Cyprus, island of love, smiling for all 365 of them

Land of golden beaches and no lakes or rivers […]

Seamus MacHugh was born in Ireland and attended university both there and Italy. While in Tanzania, East Africa, where he worked as an educational administrator for nine years, he met his American wife Sandra and had three children together. In 1993 after visiting nine countries, he was inspired and wrote his first book: Half Way Round the World in 180 Days. In 1995 his wife found work in an international school in Cyprus and the couple moved and lived on the island for over three-years.

MacHugh, decided to write Cyprus, an Island Apart: A Personal Experience and put on paper his thoughts and private observations about the island and its people. He did a thorough exploration of the island and took good care to visit all the popular and historic attractions both in north and south OF cYPRUS“On a beautiful, warm day my wife and I, along with some friends, availed of an opportunity to visit Vouni […]”

“I caught my first glimpse of Cyprus through a heat haze […] Larnaca Bay shimmered below me and through the porthole window I could see, stretching to the east, an elongated, white ribbon of hotels and apartment blocks.”

His has a sassy yet humorous way of describing the sights and the situations he and his wife encountered while exploring ‘’Nicosian footpaths also run out on you. One minute you’re on one and the next minute it has disappeared […] This zigzag game of street tag – now you have it, now you don’t – continues until you’ve almost reached the centre of the city.’’ The warm tones and sagacity, he uses to describe the ancient ruins, old castles and numerous churches found on the island: ‘’One could spend all one’s time in Cyprus visiting churches and monasteries,’’ makes this book an excellent choice for the reader who wishes to see Cyprus through a different light and share the author’s belief ‘’ […] that Cyprus has a lot more to offer besides sun and beaches.’’

Join us in the Research Centre to enjoy MacHugh‘s, Cyprus, an Island Apart: A Personal Experience. ‘’Bewitching land of ancient shrines and ancient theatres still in use, Divided land, welcoming land, land of two cultures […]’’