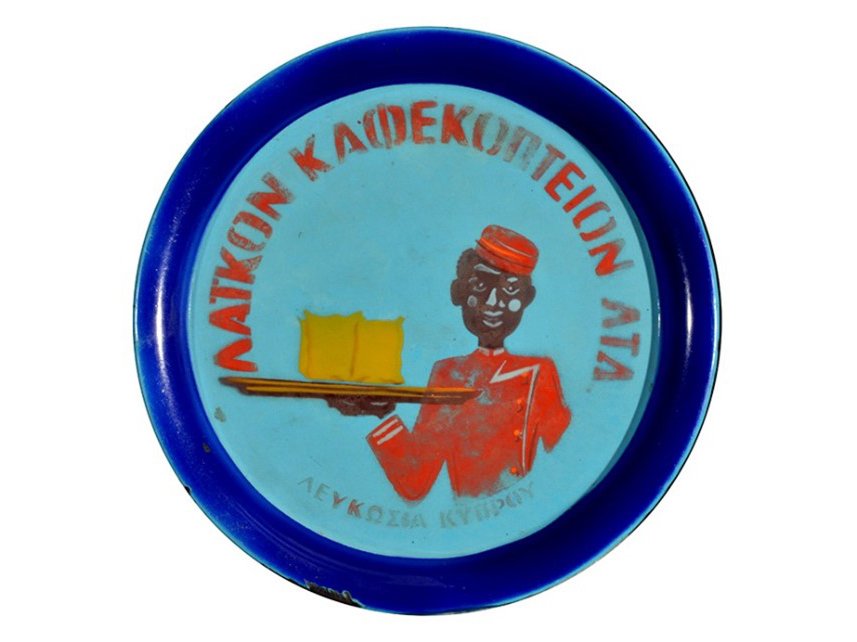 The picture portrays a colourful tin tray made in Czechoslovakia. Within a deep blue border appears the name of the coffee-producing company, surrounding a young black bellboy/servant carrying in his own tray small bags of coffee. This object is the traditional tray in which the Laikon Coffee Grinding Company served its customers their famous coffee. Peoples' Coffee Grinding Co Ltd was established in 1948, after a collective action taken by a group of professional cafe shopkeepers. The aim underlying this action was to secure that the coffee, as their first material, was delivered in sufficient quantities, promptly and constantly. The equipment was a second-hand manual roaster and a second-hand ground millstone. The staff consisted of three men and three women.

Coffee was then imported from Brazil, and local Cypriots, in their majority, thought that Brazilians were black. In an effort to emphasise the good quality of the coffee, a black servant was used to advertise the product. Furthermore, during those times, having a bellboy serving the coffee was a mark of luxury as well as quality. So essentially it is a historical logo that just stuck. With debate ranging in the West over racist branding from Rice Krispies to Coco Pops to Uncle Ben’s among others, attention has been drawn to Cyprus’s Peoples’ Coffee Grinding Co Ltd (Laikon Kafekoption) whose 72-year-old logo is suddenly raising eyebrows. It may just be a storm in a coffee cup, however, most Cypriots defend the logo and find it an intrinsic part of their coffee cup!