Did You Know? The Houstons 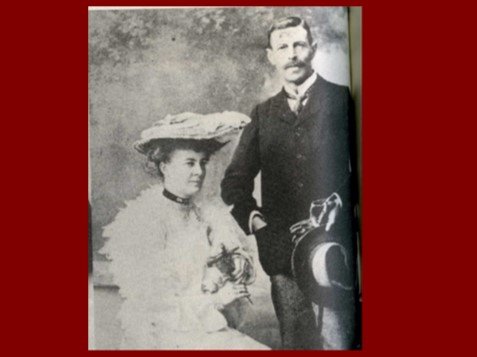 The first English, or rather, Scottish person who moved to Kyrenia was George Ludovic Houston in 1879, and he brought over his wife, Anne Douglas Stirling, in 1907. He had travelled all over the world including the Fiji Islands and was the fifth and last laird of Johnstone Castle in Glasgow, where Frederick Chopin resided in 1848.

His wife’s mother was said to have once been Chopin’s muse. They had a house built in Kyrenia which they named Livathi. George Houston was so enamored with Kyrenia that he offered to buy the whole town and move its population elsewhere. The Kyrenia people will always remember him as one of the great benefactors of the town and the person who imported sheep from Scotland, introduced correct sheep breeding, built the police station at the Agirda pass, and that outside the castle by the harbor, and was instrumental in the foundation of the hospital.

In 1907 he built, from his personal funds, the Anglican church of St Andrew’s for the British community; following his example, district Commissioner Tankerville Chamberlayne built the Catholic church dedicated to St. Elizabeth of Hungary, which he decorated with the coat of arms of the Lusignan dynasty and the motto “lord save our fatherland”… When the Houstons died they left their house and the rest of their property to “Parky” Bolton, friend and companion of Mrs. Houston. Ms Bolton married in Cyprus a British Police officer. The locals often had a good laugh recalling that it took the Boltons two weeks to reach Paphos by carriage from Kyrenia. They kept getting lost. Ms Bolton died in 1966. Just further down the house, at a small inlet caressed by the sea, a small cemetery was established. Mr and Ms Houston were buried there as well as some soldiers of the Black Watch who died from malaria. There also lies the young daughter of a knight of the Order of the Templars and some shepherds brought over from Scotland by Houston to look after his sheep.