Did You Know? Dr. Heidenstam 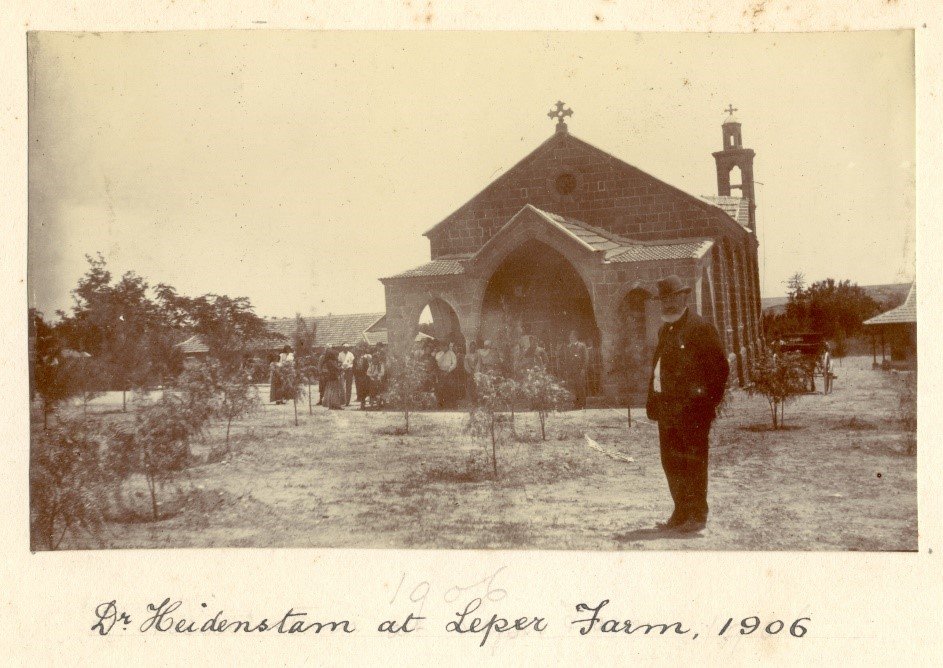 Fredrik Carl von Heidenstam (1842-1909) was born at the Swedish Legation in Athens. He was trained as a doctor in England and France. He then joined his uncle James Henry Skene in Syria where the latter was posted as consul in Aleppo at the British Consulate. Fredrik, thanks to his medical qualifications, was employed by the Turkish authorities at various posts and in 1863 he was appointed Swedish/Norwegian vice consul in Piraeus. In 1876 he married Anastasia Soundia from the island of Corfu. Fredrik probably met her while he was working as a medical officer in Preveza, a small city in northwestern Greece on the coast opposite Corfu.

His next post was in Cyprus where he was appointed medical officer in 1876 by the Turkish administration. In Cyprus Fredrik and Anastasia Heidenstam had four children. Heidenstam was soon promoted by the British, who ruled Cyprus from 1878, to Medical Officer of the port of Larnaca and then Medical Officer of the whole district; he was also appointed Mayor of Larnaca 1878-1880 and at the same time served as Police Magistrate. In 1882 he was appointed Chief Medical Officer of Cyprus, a post which he held until his death in 1909. His new post in 1883 as member of the Legislative Council of Cyprus brought him to the capital, Nicosia. The British Colonial administration rewarded him for his services by making him a Companion of the Order of St. Michael and St. George. He wrote extensive reports stemming from his experiences in Cyprus on various medical subjects, including: Report on the Epidemic of Cerebro-spinal meningitis in Cyprus (1880), Report on the Fevers of Cyprus (1886), Report on Leprosy in Cyprus, (1890) and A Primer of Hygiene or the laws of Health (1908). Being a prominent member of the society in Cyprus, and known both to the locals and the foreigners living there, the local press often obliged with much information on his life and social activities. It is believed that the reason why the British put such trust in his person and singled him out, from the very beginning, from the rest of the foreigners living in Larnaca, was the Doctor’s behaviour when the British fleet arrived to Cyprus on 13 August 1878. According to one version, Heidenstam cured Prince Edward, who was aboard the H.M.S. Minotaur, from fever. A more probable version though is that Heidanstam offered the use of the lazaretto to his H. R. H. the Duke of Edinburgh whose ship H.M.S. The Black Prince was stationed in Larnaca and offered some of his own furniture for making the accommodation more comfortable.

In his capacity as Medical Officer and Chief Medical Officer of Cyprus, Heidenstam was held in the highest esteem and appeared at every tragedy unfolding in the small town of Larnaca. Fevers, believed to be malaria, were attacking not only the local population but, more so the new arrivals, the British troops and civil servants. The island was plagued by a cattle disease called Peste Bovina, which attacked oxen and deprived many farmers from their livelihood. To stop the spread of the disease, most oxen had to be slaughtered. In the town of Larnaca alone, Heidenstam had to order the slaughtering and disposal of 80 oxen. He travelled all over the island helping farmers with their sick animals and advocating precautionary measures to be taken. The local population believed that the disease was typhoid. Heidenstam, in his efforts to appease the tension, resorted to writing an article in the press explaining the symptoms and the necessary precautions. Amongst the various measures enforced by the Government were strict prohibitions of imports from the East. No skins, cotton, hair, wool, feathers, silk, paper, etc. were allowed into the country. The High Commissioner ordered the crew and passengers of all ships from Syria to enter the lazaretto for a period of three days and appointed Heidenstam Sanitary Commissioner of Larnaca. In 1881 the locust attacks left precious little of the crops. The island’s production decreased and suffered and whole villages, stricken by poverty, subsisted only on roots and wild weeds. The old Mattei method of destroying the locusts was employed but the results were not satisfactory. The British administration resorted to forcing every Cypriot to collect locusts and their eggs in an attempt to get rid of the pestilence. Heidenstam had his hands full. Furthermore, there were the everyday casualties to be dealt with.

Years later, while compiling his annual medical report for the Government, Heidenstam enclosed the results of an extensive research he had conducted over eleven years concerning leprosy in Cyprus. In this, the Doctor analysed the history of the disease in Cyprus over three centuries and suggested preventive measures required for its eradication. Although a small leper colony existed at a distance of two miles from Nicosia since the early nineteenth century, established by the dragoman of the island HatziGeorgakis Cornesios who donated 120 donums for this purpose, this measure was not sufficient. The colony lacked proper organization, lepers were still in contact with people passing by the colony and many left at will returning to their villages. Heidenstam suggested the enclosure of the leper farm with high walls, legislation for the surrender of all lepers and their absolute seclusion, the substitution of the mud-brick huts by stone buildings, the encouragement of able-bodied inmates to work on the land, and the creation of a reading-room. The “Doctor” is still remembered in Larnaca.