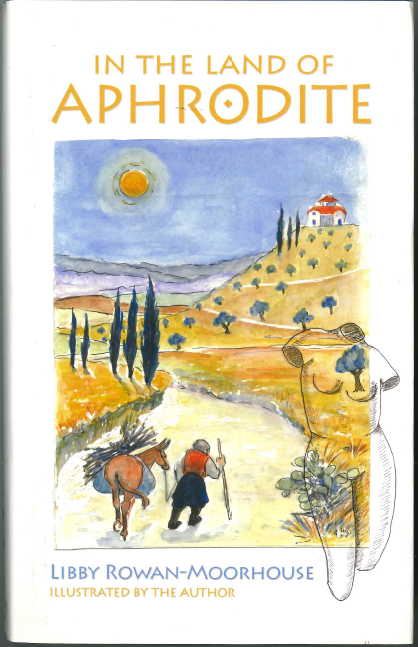 “Once upon a time, there was a village. We lived there not long ago. How can I conjure up that other village now […]”

Libby Rowan-Moorhouse was born in Queensland, a fourth generation Australian. She married her husband in England, and together they became interested in human rights. She became a council member of the Tibet Society in London and later on visited refugee settlements in India and Nepal to personally witness their needs. Together with her husband, she attended the first Human Rights Conference that took place in Poland in 1988. After living in South Africa and Zimbabwe, she became interested in the Fistula Hospital for women in Ethiopia.

Although, In the land of Aphrodite is her first book, she has written numerus magazine articles.

She was enchanted by Cyprus from the very first day she and her husband arrived and she proceeded to write down her daily encounters in a somewhat lively but fluid manner and painting a very vivid window into the everyday life of a foreigner living in a traditional Cypriot village along with the limitless hospitality and communal life found there.

The storytelling has a ‘diary-like’ character, supplemented with letters she was sending back home, thus providing the reader with colourful descriptions and illustrations by the author of the scenery and wildlife of the island. Libby Rowan-Moorhouse does not ignore the island’s troubled history, instead she records down her experiences and personal thoughts.

All in all, “In the land of Aphrodite” has all the wonderful ingredients for visitors who wish to visit this island - like good climate, hospitable people, flora and fauna and amazing seashores. Just like a modern Siren luring them into the birthplace of Aphrodite trying to hear the song of times of old that still lingers in this enchanted but unsettled place.

“I linger in this oasis for as long as possible, loathe to leave. Its kindliness envelops me like a cloak.”