While describing the efforts to go through the streets of Nicosia, E.M.B gives a picture of the terrible state of the roads 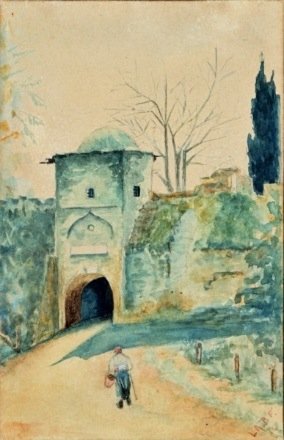 While describing the efforts to go through the streets of Nicosia, E.M.B, gives a picture of the terrible state of the roads:

Down our narrow street filed a procession. First George and Kosti carrying the great baskets, Charlotte with baskets etc. I with Gerald’s gaudy wheelbarrow, his spade, a great basket and a lantern and Mary bringing up the rear with several small baskets, some books. A large tin containing some sponge cake thrust in hastily at the last minute and an immense untrimmed flap hat, kindly lent by Mrs Croker. W. King Harmann riding by looked absolutely appalled. We had a terrible time of it packing the diligence, the driver declaring that nothing should be put on the seats! Of course we did put things there and at last started with much bumping, after the manner of those machines, and got safely outside the Kyrenia Gate where we stuck in the new stones in the road. After a time, and with the help of a native we went on again and got to the first woods where we again stuck. Mary and Charlotte got out and shoved at the wheels. Kosti and the driver pulled at the wretched horses  and we moved a few inches at a time, propping up the wheels with stones at each stoppage as otherwise we slipped back a good deal faster than we advanced