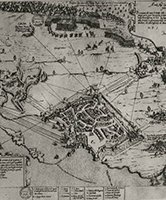 On September 17 or 18 Mustafa Pasha made his host march towards Famagosta, and left to garrison Nicosia four thousand janissaries and a thousand cavarly under the command of Muzaffer Pasha. He caused the guns to be dragged by his own Turks, and the troops set out in great triumph and with musicians to show their joy. They bore away also the artillery found in Nicosia. Mustafa pitched his own camp three miles from Famagosta, in the village of Pomo d' Adam, and the rest went to the gardens of Famagosta. As soon as his troops were rested he sent them to cut trenches and make forts with fascines, sacks and earth, and thus they tried to disable such Venetian vessels as were in the harbour, with the idea of cutting off our folk from the hope of flight, such as by means of these they might compass in the coming winter: but our side was ready with a large counterwork to dismantle theirs, and so forced them to abandon their plan.