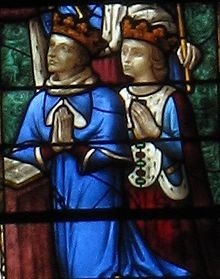 “At that time Monsieur Suarez, Admiral of Cyprus, was present and came up to me in a very friendly way, explaining that he was a Castilian like myself, and begged the king and Cardinal and Madame Ines that they would allow me to be his guest; and so importunate was he, especially with the lady, that he gained his point, and straightway I left with him.

He was a gentleman born in Segovia, of the family of the Cemadilla, and when he was a youth and wandering about the world found himself in Cyprus the day of the battle which the king Janus [at Choirokoitia, July 7, 1426] fought with the troops of the Soldan, and showed such personal bravery that he saved the king's life, and was taken prisoner with him and carried to Babylon.

It is a custom with the Moors that no one shall go on horseback who is not a Christian and renegade, and the day the captive king entered Babylon they brought two horses, one for the king and the other for Monsieur Suarez; and when they were brought before the Soldan and he knew the truth of the story he ordered that the same honour should be paid to Suarez as to the king. And when some days had passed when they were talking of the king's ransom the Soldan said to M. Suarez that if he intended to interest himself in the king's freedom that he would let him go on parole, so that he returned with the money promised, or at least in person.

M. Suarez gave his word, and the Soldan ordered all that he needed to be given him, and they even say that he asked him what manner of dress he wished to wear, and he replied, after the Syrian fashion. The Soldan ordered it to be provided at once and dismissed him. He left and came to Cyprus, and there with the Cardinal and Madame Ines, and the rest of the Council, it was arranged to send certain gentlemen to the kings and princes of Christendom to beg their help for the ransom of the king.”