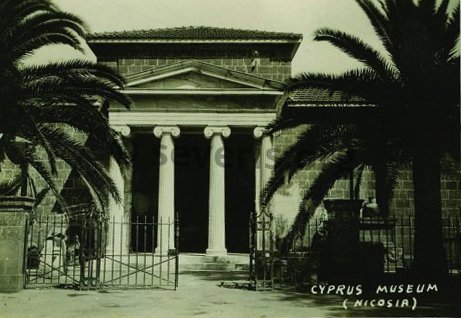 A boat-load of the St Barnabas pilgrims arrived, they had been visiting the War Graves in Palestine. About 120 came up to Nicosia and the museum, I sold them duplicates and made £28, not too bad. Some of them came to lunch including Sir James Parr, Sir Edward Clayton, Miss Houghton (the American ambassador’s daughter) Miss Lewis whose school Doris and Angela were at and Miss Neave, Mrs Barber and the Rev. Molineux, the organisers of the movement. After lunch nearly all of them came to see me open another tomb. It had fallen in but I knew it was a good one as it had a walled up entrance instead of a single stone. One very nice pot with a face on it was broken but we got out one glorious one with ornate handle, a checked design and picture of a fish (plaice) on it, one of the first things I have yet found.