Leto Severis describes the arrival of Caterina Cornaro to Asolo 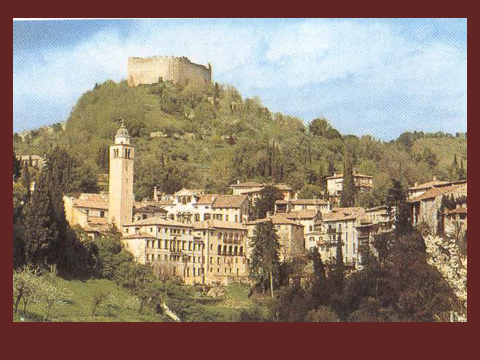 Leto Severis describes the arrival of Caterina Cornaro to Asolo:

Outside Asolo a delegation from the city welcomed Caterina with warm words. She entered the city with great solemnity and the ruler, Girolamo Contarini addressed the Queen at the entrance. She was led onto a platform, adorned with precious fabrics and flowers and there she was offered officially the city’s hospitality. The streets were full of people come to welcome Caterina and once again she heard them continuously calling out to her with the words “Queen of Cyprus”. What bitter memories these cheers brought back to her! Asolo presented and joyful and festive air. She was then led to the church and sat on a throne decorated in gold, specially prepared for her, and then mass was chanted. After the service other addresses and poems written in her honour were recited. Finally she arrived at the Palazzo Pretario, an old building communicating with the castle through an underground tunnel, built some centuries before by the tyrant Ezzelino IV. She was going to live in this building until the small palace which had been started for her had been finished. She named it “il Barco”. Caterina followed the work on her palace with great care. It was a good occupation for her to escape from her unhappy thoughts. In 1490 she moved into her elegant palace.