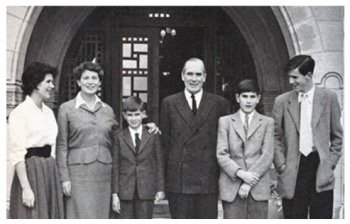 The 16th of August came in one of the hottest summers I remember. We signed all the documents at the midnight ceremony. The next day the new President and Vice-President came to say their farewells at Government House, and Sylvia and I and our three sons drove off to Famagusta. We sailed away on H.M.S Chichester. As we looked back I remembered a quotation by Shakespeare I had used in jest when I arrived as Governor two and a half years before. I had referred to one of my predecessors as Governor of Cyprus, Othello, and to the cry which went up from the walls of Famagusta as his ship approached: “Bring renewed fire to our extinct spirits and give all Cyprus comfort.”