6 June 1838: The American missionary Lorenzo Warriner Pease was travelling from Larnaca to Famagusta: 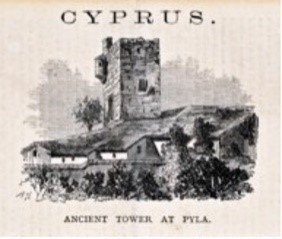 6 June 1838 - The American missionary Lorenzo Warriner Pease was travelling from Larnaca to Famagusta.

"I observed that near the castle (two hours from Scala) there were manifest ruins of a village and an old church in pretty good preservation, built of the materials of another. The surrounding country is a kind of sandstone. Within a few rods I discovered the ancient quarry from which the stones of the old village were cut. Beyond about one hour or so, the surface for about four feet is pudding stone and beneath is sandstone. Arrived at Vondizziano about 6.20/60."