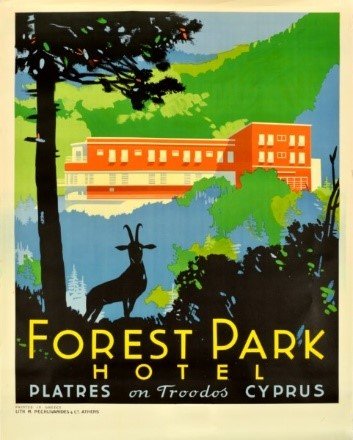 "A long excursion had been planned for Sunday, and it was to begin from here. On the last day of June we had a charming evening which was concluded with dancing in one of the palace rooms in the bewitching glow of the moon.

On Sunday we set off toward the mountains, passing Kalapanagioti, Pedoulas, and drove from there up to Platres, where we ate lunch in one of the big tourist hotels. From Platres the tour continued up to Tróodos (about the height of Kebenekajse) where we paid a paperwork visit to the governor.

From there we coasted down to the huge mining district Amianthos (one of the world’s three asbestos mines) where we drank coffee at the home of our very good friend Kepler, a German who has just become chief of the mining operations there.

When we finally came down from the mountains, the sun set and the journey continued in moonlight to Nicosia, where all four of us went to the cinema. This Tróodos tour is considered to be among the most beautiful in the entire Eastern Mediterranean, and any attempt to describe the enormous vistas that alternated before our eyes would be futile. Up there it was cool and fresh in the pine forest."