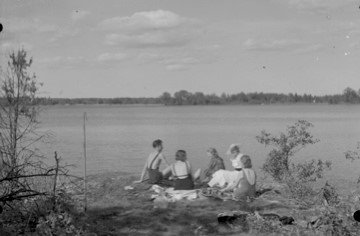 Alfred Westholm of the Swedish Cyprus Expedition described to his parents how the expedition was entertained at Mersinaki:

This last Sunday and the two nights I had the entire expedition out to visit here. Erik had sent word that he expected an invitation here. He also belongs to that type of people who think they are longed for everywhere. I answered by asking the lot of them to come out, though I dreaded it greatly. I suffer so from being disturbed by talk in my grass tent. The visit, however, turned out to be far more pleasant than I feared. They all came in time for the evening swim. Then we sat down at the dinner table just as the moon rose. I had done my best as far as the food was concerned and with Eleni’s help everything went fine with the 6-7 courses. Sunday was spent mostly in the water, whose temperature now has become a tolerable 30º. We have the most divine bathing beach right outside the tent and there is always a fresh wind from the sea, which makes Mersinaki a paradise even now in August, when Europeans prefer to stay a few thousand metres up in the mountains. There is another fabulous thing, namely that from the mining company up at Xero I have managed to get ice every day. It sounds fantastic that out here in the wilderness in 40º heat we can sit with chilled drinks and frozen fruit, not to speak of the butter, hardly spreadable with a knife. I have acquired an excellent ice box from Nicosia via Einar.