Russian refugees in Cyprus and Turkey

This collection, containing 51 black and white photographs some of them printed on postcard paper, documents the daily life of Russian refugees, children in particular, while interred at refugee camps in both Cyprus and Turkey (Proti island) during 1920 - 1921 as a result of the Russian Revolution of 1917.

In 1920, about 1,546 Russians arrived in Cyprus at Famagusta, and were put up in the ex-WWI camp at Caraolos. Some died within a few months. Others chose to leave for Serbia and Bulgaria where they had relatives. The rest stayed in Cyprus despite the eagerness of the British Government to move them out. Smaller groups followed those already here. Some came from the island of Proti, near Constantinople where they first arrived while escaping from Russia.

The photos focus mainly on organized lessons for children, including reading, writing, crafts, exercise, as well as, recreational activities like playing games in the garden or trips to the beach. Adults are shown either caring for children, participating in crafts or engaged in other skilled activities such as sewing, carpentry and shoe repair. A number of photos depict large groups of both girl and boy scouts, in uniform, along with their scout leaders. 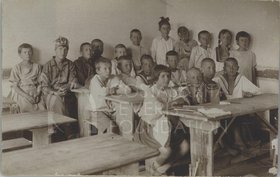 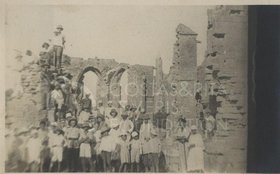 The school on the isle of Cyprus, “an educational excursion to the fortress Famagusta”
1920 – 1921 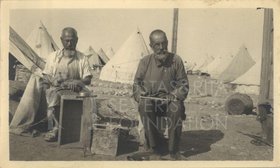 Russian Refugees In Cyprus And Turkey